20 years ago, the Fair Play wine growing region received recognition as a distinctive AVA.  An AVA is a specific appellation of origin where it is a defined grape-growing region with distinctive geographic and/or climatic features that distinguish it from surrounding regions and influence how grapes are grown.

The Fair Play AVA is located south of Placerville and about 40 miles east of Sacramento in the Sierra Nevada foothills.  Most of the vineyards in the AVA are at altitudes ranging from 2000’ to 3000’ above sea level, one of the highest average elevations of any wine-growing area in California.  The AVA surrounds the town of Fair Play, a small settlement that began its deep roots as a gold-mining town in the 1850s.

The climate in Fair Play features warm days and cool evenings which is a direct benefit from the altitude. The difference in temperature affords the grapes the opportunity to develop complex tannins, sugars and phenolic compounds.  We are also above the fog and have very mild breezes during the growing season.

The grapes of the region benefit from an abundance of sunshine coupled with a lengthy growing season producing wines with ripe, bright fruit flavors and balanced acidity.  The area favors grapes such as Cabernet Sauvignon, Zinfandel, Petite Sirah, Syrah, Grenache, Barbera and Viognier to name just a few of the aromatic varietals found in the Fair Play AVA 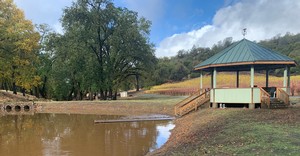 What a crazy harvest!  After the Caldor Fire stopped about 4.5 miles from our vineyard in late August, we scrambled to have our grapes tested for smoke taint which fortunately came back without taint.  Harvest then came fast with picking, crushing, fermenting and pressing finishing up on October 28th, a month earlier than most years.  Not too mention that our pond filled up in one storm after over 14 inches of rain dumped from October 23rd to the 25th.  Thankfully, all of our grapes were in the winery before the storm hit.  Yields were down this harvest but the fruit flavor is wonderful and we believe 2021 will be a great year for wine in the Fair Play AVA.

It is a good time to drink Rose' on the patio or by the pool.  Call to make an appointment for tasting.

We are working towards a Grand Opening of our winery on Memorial Day Weekend.  If all goes well, we will be open for tasting.  We will keep you posted!